On behalf of the Institute for Art in Public Space (KiöR) Graz, the Berlin artist duo Dellbrügge & de Moll questioned the relationship between art and power. In Graz, once the “city of the popular uprising,” they met with a positive response.

As part of a lengthy research process, they dealt with the relationship between art and state power during the Third Reich, but also with the after-effects of these implications which reach into our present. Using the example of the state artist Arno Breker and his close connection to Hitler, the SS state and the concomitant mixture of right-wing ideology and the idea of art, they captured a frighteningly timeless image of control, power and prerogative of interpreting art and non-art. The core of all considerations were three questions: Which conditions constitute artistic production? What function does politics attribute to art? How does art relate to politics?

Original texts by Breker, Hitler, Goebbels, ideologues and art historians were provided for the performer to make the talking about art during the Nazi period audible. In a two-week series of the public working process, these texts were spoken and rehearsed on different days. Here, individual passages were repeated and articulated in different attitudes and ways of speaking in front of the audience. Together and in a public dialogue with Dellbrügge & de Moll, every day the performer developed a different style of performing the appropriate material, which could change depending on the audience, gesture and space. Thus, the content was illuminated from different perspectives and made possible a less historical and more modern reflection of the sensitive content.

Documented in polar21- Politik I Theorie I Alltag, autum edition 2016 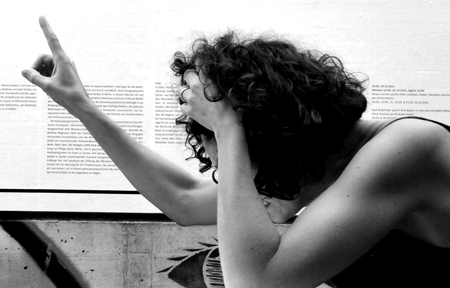